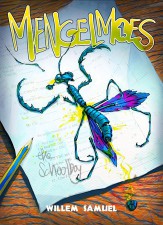 From Loisel’s Peter Pan to Howard Hardiman’s The Lengths to Ellen Lindner’s The Black Feather Falls, few comics publishers have as much right as Soaring Penguin Press have to label their catalogue with that otherwise much over-used adjective “eclectic”.

Their latest offering marks the debut of South African creator Willem Samuel. Mengelmoes (reviewed here this week at Broken Frontier) is a slice-of-life six-part series set to chronicle Samuel’s life growing up in South Africa from his 1997 school days in this opener onwards. Mengelmoes is more than just your standard nostalgic autobio comic however – it’s peppered throughout with bizarre dreamlike divergences such as the on-page Willem encountering 2000 AD’s Judge Dredd on the school run or his campus turning into a zombie movie during assembly.

A slice-of-lifer with a fantasy twist from a creator to watch, Mengelmoes underlines the growing reputation of Soaring Penguin Press as an up and coming publisher for whom diversity is firmly on the agenda.

I’ve chosen Revenge because the expectation of it has me salivating. Not just because it has an interesting idea (washed-up, action hero actor takes on the persona of one of his characters to wreak a bloody revenge), but also because of the man who originated it.

Jonathan Ross has gained critical acclaim through his recent move from avid comic book reader to writer, but most importantly for this comic he is an entertainment industry insider; a movie critic who presented the Film Programme on BBC for eleven years and famous British chat show host. Which leads me to wonder, who is he really basing his protagonist – Griffin Franks – on? Is this guy someone he actually interviewed? Whom he knows?

If the ‘it’s-who-you-know’ credentials of Ross aren’t enough to make your mouth water, his collaborator might force you to part with your pennies for a copy: the Eisner award-winning creator of Marineman – Ian Churchill.

James Robinson is taking the Fantastic Four back to basics. When that wording is uttered with regard to Marvel’s first family, it doesn’t mean Reed will be in his lab 24/7, that Sue will be the kind of stay-home mom who bakes pancakes for the kids and that Ben will be growing flowers for his dear Aunt Petunia.

No, back to basics implies heroics amid upset family dynamics, evil ploys by Doctor Doom and Johnny Storm alternating superheroics with reckless behavior.

A lifelong Fantastic Four fan, Robinson will do the Richards family justice in what looks to be his finest Marvel work since returning to the publisher. He’s bringing Leonard Kirk along for the ride, who gives the book a jovial undercurrent we haven’t seen since the days of the dearly missed Mike Wieringo.

A project begins life as a motion picture, one among a host of similar early-1980s sci-fi thrillers, is lost when a film studio burns to the ground, and re-emerges from a sort of development hell as a comic book, thirty years later. Such is the origin story of Vandroid, a new five-issue miniseries from writers Tommy Lee Edwards and Noah Smith, joined by the artistic talents of Doctor Who Magazine and Jersey Gods illustrator Dan McDaid.

Resurrecting a lost film from decades past, the creators of Vandroid take their chances with a story that may have been destined to become a forgotten flop or a cult classic. But what very interesting chances they are…

There have been few more attractive books on the shelf in the past year than Satellite Sam, with its creative dream team of Matt Fraction and Howard Chaykin. There’s no artist you’d rather see working on this sexy, noirish, period tale of the early days of network TV and the emotional cost on the people involved.

The intricately structured nature of the book and its wide ensemble cast might mean it’s not the easiest for a casual reader to get traction on, so this issue, marking the start of volume two, is a good opportunity to jump on board. And, as ever with Satellite Sam, I’m sure there will be plenty to keep us in suspenders – sorry, suspense. (I’ll get my coat…)

From Oni Press comes the debut volume of an ongoing graphic novel series from cartoonist Wook Jin Clark (The Return of King Doug). Giant monsters are attacking the city of Atlanta from all sides, and the fate of the city rests in the hands of average high school kid Adam, accompanied by an immortal demigod and a host of… well, less promising candidates. Together, they are Megagogo!

It’s super robots versus Kaiju and the Ku Klux Klan in the American South, and Megagogo Volume One is poised to kick Clark’s new series off with a roaring start.

Picking up where the smash-hit video game left off, fan-favorite writer Gail Simone carries on the adventures of Lara Croft in a new series from Dark Horse Comics. In the game, Lara ascends from a frightened young adventurer to a true survivor as she hones her instincts, tests her physical limits, and uses her intelligence to decipher the history of a long-forgotten island and escape it.

Wolverine and the X-Men #42

Everyone points to Daredevil and Hawkeye as the superhero books that brought the fun back to our funny books. But one title that debuted around the same time as Daredevil that deserves just as much credit is Jason Aaron’s Wolverine and the X-Men. The book had combined the fun and wonder of a school full of incredible students like Harry Potter, with the humor of Saturday morning cartoons, and the typical action and adventure to be expected of a superhero comic. And the art on the book was always killer.

Aaron’s run on the title comes to an end with this issue, joined by most of the artists who had previously defined the title. The series will relaunch written by Jason Latour, and Aaron will stick with the X-Men in Amazing, but the end of this series is noteworthy. So much in fact that the entire run is already being collected in an omnibus, set for release this summer. Fans of the series owe it to themselves to check out the final issue, and newbies should look out for that oversized hardcover. It’s worth every penny.

The debut issue of Deadly Class was a blast of stylish storytelling from writer Rick Remender and – particularly – the art and colouring team of Wes Craig and Lee Loughridge, switching from a moving and politically charged look at the issue of homelessness to a high-octane action comic.

It’ll be interesting to see if the creative team can keep up the momentum as our boy Marcus Lopez starts his studies at the Kings Dominion High School for the Deadly Arts. The solicitation text promises us “a locker full of death threats, a schedule full of brutality, and whispers in the hallway about his mysterious past”. Ah, that brings back the school memories…

Serenity: Leaves on the Wind #2

Browncoats rejoice! We are finally treated to the story of the Serenity’s crew after the events of the film rocked the ‘verse to its foundations. Despite their best efforts to remain hidden, the crew is being pursued from all sides. Zoe’s baby has arrived, but she is going to need medical attention that isn’t available so far from civilization. The crew will be vulnerable to the Alliance forces and the new resistance organizers seeking them.

The second issue moves right into the action, and after they become separated, River offers to give up the secrets in her head to save everyone else. But we all know how the best-laid plans of this crew turn out!

The “First Contact” storyline kicks off with Power Girl’s abilities malfunctioning as Superman approaches her in an adventure that carries over into World’s Finest. Greg Pak has taken a brains-assisted-by-brawn approach rather than a simple brains-over-brawn outlook from the start, which places Batman on more than an equal footing with Superman and makes the partnership an education for both.

The result is a unique dynamic between Batman and Superman that has revitalized this series, but after the second storyline with its landscape artistic approach didn’t resonate with readers, this new arc has a bit of catching up to do.