“Quite simply, he is one of the most important and intelligent creative voices in current UK small press comics.”

That soundbite, adorning the back cover of Simon Moreton’s Days – the Avery Hill Publishing collection of work from issues #4-6 of his self-published Smoo Comics and other hard to find small press publications – comes from one of my previous ‘Small Pressganged’ pieces covering the Bristol-based creator’s comics. It’s possible that at this point you may be thinking that’s a big, bold, hyperbolic, and probably unsupportable statement. If that’s your initial reaction, though, then I would suggest you need to carry on reading this column. Because I would hazard a guess that you’ve never come across Moreton’s unique approach to the form to date… 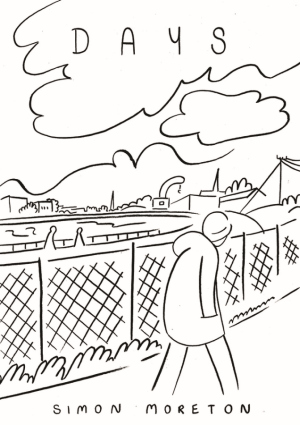 I first covered Smoo Comics back in August 2012 and even then it was clear that this quietly uncompromising creator was a major find. Days signifies an opportunity not just to appreciate Moreton’s comics for a second time but also to trace his evolution as an artist. For those coming to Smoo Comics fresh, Moreton’s zine-like small press comics fuse autobiography, psychogeography and elements of graphic medicine – his struggles with depression and anxiety are a recurring theme – in short reflective pieces that not only powerfully communicate events from his own life but also invite readers to revisit their own similar experiences. 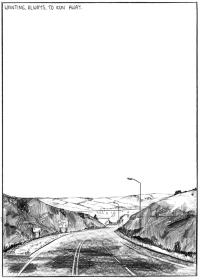 ‘Marlow’ – the first strip in Days, reprinted from Smoo Comics #4 – is a prime example of this. Here we’re treated to Moreton’s talent for catching the integral essence of a place in a visual essay on the small town that he grew up in. This is the ideal opener for a new reader because in so many ways it’s quintessential Moreton – the perfect evocation of his examinations of where memory, time and location intersect, and subsequent exploration of the accompanying emotional resonance to be found at these junctures. In this case it’s the adventure-filled streets of childhood gradually transforming into an ennui-soaked suburban prison in later teenage years.

The stories from the fifth issue of Smoo cover a period when Moreton was living in Falmouth in his early twenties; a point in time when his life was characterised by solitude and self-reflection. Visually, there are signs of what is to come but those pared back layouts – reducing each image to a core distillation of its actuality – have yet to develop to the degree they will do. Loneliness and self-examination are at the heart of this sequence of shorts, mirrored in his use of sweeping landscapes, empty streets and roads, and the sparsest of dialogue. 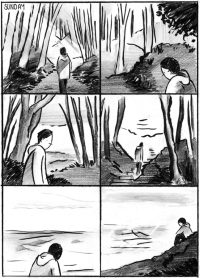 By the time we reach those entries originally published in Smoo Comics #6 Moreton has hit his stride in terms of the stripped back presentation of his work; as the pencil marks on the page decrease there’s a corresponding increase in the artistic eloquence of his storytelling. Many of the comics here encapsulate discrete bubbles of time that may be small in immediate consequence but echo our own experiences with an almost haunting clarity: the comfort of friends, the process of claiming a new home as our own space free of the spectres of the past, carefree youthful days, and even something as simple as walking through the rain on a summer’s day. That latter a testament, perhaps, to how in a Simon Moreton comic the quietest moments can speak the loudest.

For Avery Hill, securing this collection is an astute publishing decision. I would even say it’s something of a coup. Days is a handsome and utterly essential re-packaging of critically acclaimed material with something to offer to both those new to Simon Moreton’s work and those who have encountered his comics previously. For the latter not only is there that more obscure material – which may have slipped by them before – but also a selection of Moreton’s own endnotes on each story, adding context and extra layers to each narrative. 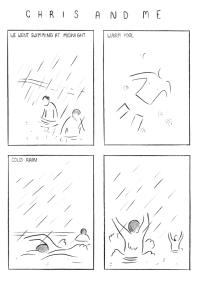 However, if you haven’t read any Smoo Comics in the past I would suggest, initially, that you avoid reading that commentary. The power of Moreton’s slice-of-life ouevre lies not just in the specifics of each event he’s revisiting on the page but in the reactions those remembrances trigger in the readership. As I’ve said in the past in ‘Small Pressganged’ write-ups “Moreton has a canny knack of engendering an empathic response from his readership, inviting them into his meandering narratives and providing something both identifiable and familiar.”

Read the book, consider the emotional responses each story elicits, and then carefully mull them over. Maybe return to Days a few weeks later, re-read it and then examine those additional explanatory thoughts. It’s a point I’ve made before and even though it’s a ridiculously contradictory statement to be making after a few hundred preceding words of analysis these are comics that, first and foremost, you should be immersing yourself in rather than meticulously dissecting.

After all, these aren’t comics you’ll simply feel a connection with.

For more on the work of Simon Moreton check out his site here. Days can be purchased from the Avery Hill Publishing site here priced £11.99.