THOUGHT BUBBLE 2022! For Thought Bubble last year Fraser Geesin and Laurie Rowan introduced us to the cast of Purple Hate Balloon. In that memorable one-shot they took us to an alternative UK that, despite having all the familiar trappings of our own suburban lives, had also taken some batshit crazy diversionary paths. Here we found ourselves in a world where genetically engineered floating animals designed to feed off negative emotions were commonplace and people had valves fitted to their heads to disperse their anger if necessary. It was dark, bizarre and wonderfully random, and the good news is that a sequel, Pricks, is debuting at Thought Bubble this year. 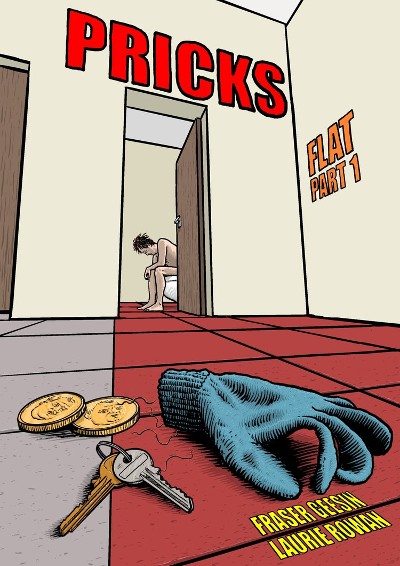 As Geesin explains in the comic’s publicity blurb: “Unfortunately the characters of Roger and Darren and the skewed world they inhabit wanted to keep living. They wouldn’t leave their creators alone until another comic was written, drawn and published. That comic is Pricks.” The title is a direct reflection of the first comic’s entertainingly annoying (and accidentally genocidal) duo Roger and Darren whose surreal environment takes a different turn this time around when Roger takes on a new career as a landlord and homeless unfortunate Darren finds himself as the resident of one of Roger’s (fractional) apartments. 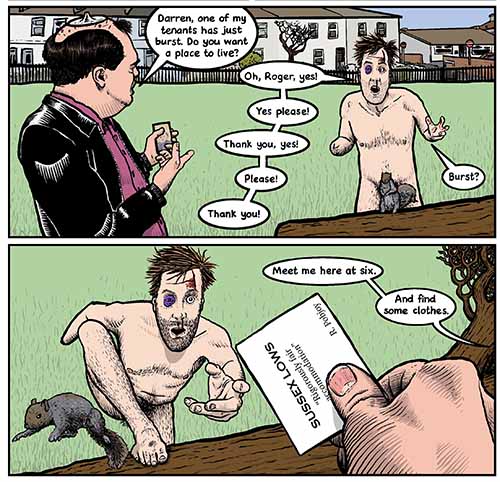 It’s the characters’ casual acceptance of the absurdist qualities of their world that makes Pricks such an undeniably funny read. Poor pathetic Darren is reduced to wearing his one possession – a glove he found on a railing – over his genitalia, which leads to surprising results on social media. Meanwhile the obnoxious and terminally insensitive Roger is now convinced he has become a nice person – “I shit kindness in my sleep now for breakfast” – despite all evidence to the contrary, and is looking to reconnect with his son. “Parenting is hard. Kids just don’t put in the effort to get to know their parents.” 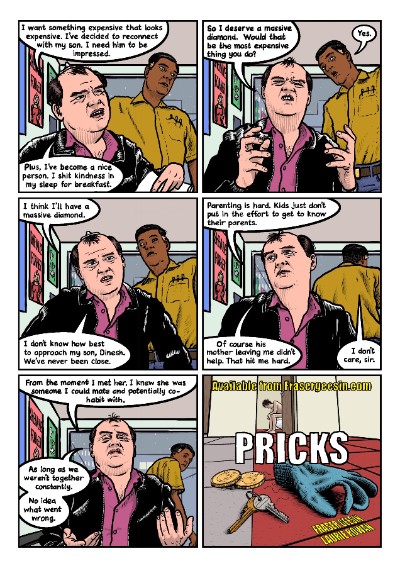 From Darren’s spartan flat (entrance via an overhead trapdoor, or as it’s referred to here with a Carry On style nod and a wink to the audience a “front bottom door”) to Roger’s oblivious chat with a shop salesman who clearly despises him, Pricks wrings out every last drop of bleak and morbid humour from its amusingly vague premise through both visual jokes and its often caustic dialogue. There’s a kind of grotesque realism to the characters that allows them to straddle the divide between familiarity and gross caricature, and the sight gag punchline Pricks builds up to provides a genuine laugh-out loud moment.

If you want to read some social commentary into this about ephemeral internet fame or the evils of landlordism then it’s there for the taking. But in an interpretive sense Pricks works far better as a foray into uncompromisingly cutting eccentricity. Its refreshingly miserable wit ensures this is yet another new Thought Bubble book to make a beeline for in an unprecedented year for excellent TB debuts.