Gill Hatcher’s role in the Team Girl Comic anthology, and the comics community that has evolved from that collective, have been covered here at Broken Frontier a number of times over the last couple of years in both reviews and a comprehensive interview. Hatcher’s contributions to TGC have always been among the standout offerings in the book – particularly her memorable autobio offerings – and followers of her work will also be aware of her interest in the natural world as displayed in the Go Wildlife! title she self-published a while back.

The Beginner’s Guide to Being Outside combines that love of the outdoors world with those same slice-of-life narratives that Hatcher has proven so adept at presenting. It follows Megan, a 14-year-old from Manchester, forced on a family holiday to the Scottish Highlands when she would much rather be spending the vacation in Tenerife. Almost glued to the technology that defines her life, to the exclusion of all else (brilliantly observed in the illustration below), she’s obsessed with items like her smartphone and iPod. With not just her boredom to deal with but also the crumbling relationship between her mother and stepfather, Megan’s casual downloading of a free wildlife app to her phone has significant consequences, as sullen teenage moodiness is slowly transformed into an appreciative joy of the flora, fauna and environment around her… 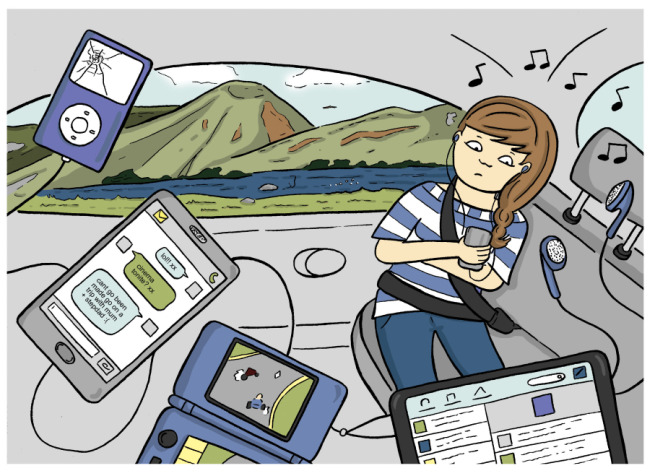 When we first meet Megan it’s almost as if we’re thrown into events a couple of chapters in. Hatcher fills in the backstory of her cast in increments, allowing the reader, initially, to slowly infer a certain amount of the intricacies of Megan’s family set-up for themselves. It’s a technique that adds a certain dramatic naturalism to the narrative; one that Hatcher’s placement of easily relatable cartoony characters on a realistic background serves to emphasise. Indeed, her visual characterisation is outstanding throughout. It’s quietly efficient and understated – teenage indifference, boredom, frustration and, eventually, Megan’s growing awe of the world around her, all captured beautifully in her always expressive layouts.

After last year’s The Festival by Jazz Greenhill, The Beginner’s Guide to Being Outside is the second Avery Hill Publishing book to be presented in the landscape comics format, and it’s a shrewd and inspired choice. Not only is this a handsome title physically but the atypical layout means that the full page views of the Scottish countryside that Hatcher punctuates the story with can be appreciated in all their panoramic glory. 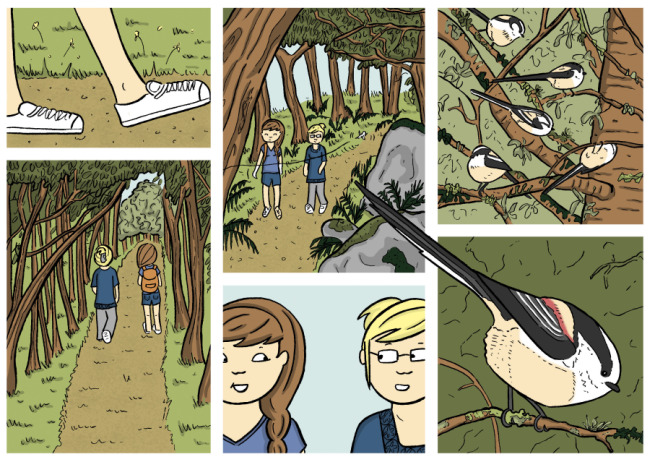 And it’s as Megan’s gradual realisation of that very splendour of the highlands grows, that the reader too is pulled further into the majesty of the scenery and animal life that Hatcher so stunningly recreates. Some of those moments are subtle, some of them are spectacular, but so invested are we in Megan by the story’s end that we share her wonder at the revelations she experiences with an intense sense of joy. Interspersed throughout is a commentary from the wildlife phone app on the creatures she observes. This is a clever storytelling device, allowing a tangential narrative voice that avoids the intrusion of unnecessary expository dialogue.

No doubt there will be some readers who will be disappointed that there’s no pat resolution to the storyline of domestic discord that superficially sits at the forefront of The Beginner’s Guide to Being Outside. But anyone who feels that way will be dramatically missing the point. What we have here is a graphic novelette that slowly disconnects us from the turbulence of the modern world and invites us to immerse ourselves in the comfort and solace of nature that is embodied in Megan’s journey of discovery. Unassuming and delicately constructed, The Beginner’s Guide to Being Outside is a triumphant and gorgeously executed piece of all-ages storytelling that I have no doubt will propel Gill Hatcher’s profile to the next, and much deserved, level of recognition.

For more on Gill Hatcher’s work look here. You can order a copy of The Beginner’s Guide to Being Outside here from Avery Hill Publishing priced £6.00.