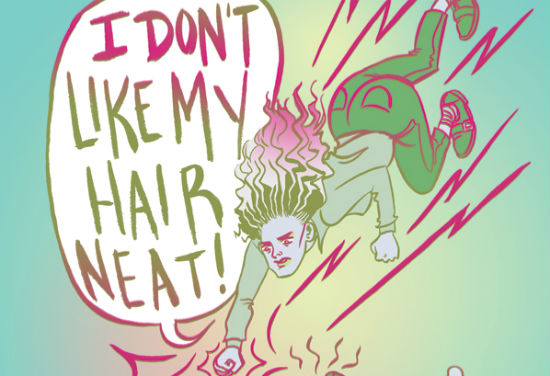 It was during my background research/reading for the recent coverage of Avery Hill Publishing’s summer launches – Julia Scheele’s collaboration with Ricky Miller on Metroland was one of four uniformly impressive releases from the up and coming British micropublisher – that I realised I had somehow managed to neglect to give any time to Scheele’s second self-published collection of comic strips when it originally hit the shelves at the very end of last year. I Don’t Like My Hair Neat #2 gathers together examples of her work from a variety of sources; some of it all-new but other pieces that originally saw publication in anthologies like David O’Connell’s ink + PAPER or online at her own site. 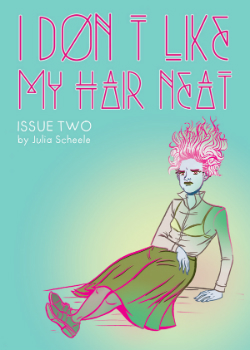 Like Jaime Huxtable’s Jammo – reviewed here in ‘Small Pressganged’ last week – I Don’t Like My Hair Neat is another one of those compilations of material that showcases an individual creator’s ability to present stories that cross a wide spectrum of styles, genres and emotional resonance. Autobiography and powerful slice-of-life storytelling sit side-by-side with visual poetry and song interpretations. It perhaps doesn’t contain quite the same elements of sudden randomness as the first issue of I Don’t Like My Hair Neat but the breadth of storytelling technique is immediately obvious from even the most casual riffle through its pages.

The longest form work here is ‘What is Left Behind’ written by Alistair Bohm, one of the few co-created pieces in #2. It’s an unsettling and pensive piece centred on a small roadside diner during a bitterly cold winter; an unnervingly low key eight pages given the tragic events that are unfolding as a backdrop to the lives of the eatery’s staff and clientele. The juxtaposition of its disconcerting narrative voice, parallel imagery, and that slowly encroaching background horror creates an atmosphere that is both a little abstruse and yet memorably melancholy.  I suspect fans of the work of Douglas Noble will find something of interest here. 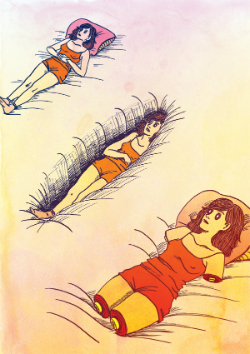 ‘Bad Omen’ is an autobio offering where Scheele details a trip to Brazil with her then boyfriend and their discovery, on the morning of Christmas Eve, of the beach-strewn remnants of a Candomble celebration from the night before. This fusion of Catholic and African religious belief can extend to animal sacrifice, and what is so brutally captured here is the vast schism between their polarised reactions to the spent festival’s detritus. Julia’s curious excitement is so sharply counterpointed by her boyfriend’s utter horror at what they have witnessed. Quietly foreboding, with a sense of oppressive heat throughout, this is a short story where as much is said in the body language of the characters as in the narration or dialogue.

The strip in this collection, though, where Scheele excels is its final offering ‘Sinking’ (above left); a purely visual representation of the cocoon that depressive illness can weave around us. This is an outstanding example of how comics as a medium can be used to convey personal experience in a way that no other form could. The solitary nature of depression, its inescapable hold, and the tired resignation of the sufferer are all manifested with a disquieting clarity in this potent visual metaphor. There are thematic echoes of this in other I Don’t Like My Hair Neat shorts ‘Focus’ and ‘Keep Moving’ which, again, underline Scheele’s remarkable ability to communicate mood and state of mind. Discrete moments in time that nonetheless invite the reader to linger on their haunting and familiar subject matter. 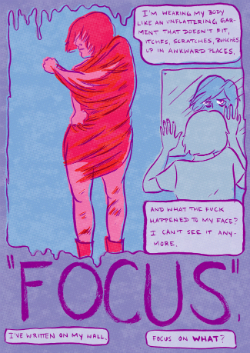 Throughout, the careful and complementary use of colour to match the direction or tone of each story is exemplary. Her comics interpretation of the song ‘Tell You Now’ by Le Tigre, for example, adopts a muddy uniformity to its colouring, heightening the sense of oppression inherent in its pages. The only exceptions are a considered use of red to highlight both violence and its protagonist’s ultimate defiance in the face of her ordeal.  ‘Sinking’ maintains a similar dreamy palette through its eight pages emphasising the relentless routine of mental illness. It’s all indicative of Scheele’s wider ability to deftly manipulate the storytelling opportunities that the comics page offers – her collaboration with Chrissy Williams on the two-page ‘Magic’ also displaying her understanding of how the structure of comics and its special relationship between creator and audience  can be uniquely exploited to impart authorial intent.

I Don’t Like My Hair Neat #2 serves as not just an introduction to the comics of Julia Scheele for those unfamiliar with them but also an appetiser for potential longer form work. With a full-length graphic novel in the planning stages, and Metroland’s debut this month, there’s no better time to check out the sheer craft behind her sequential art.

For more on Julia Scheele’s work check out her website here. I Don’t Like My Hair Neat #2 is available at her online store here priced £5.00.